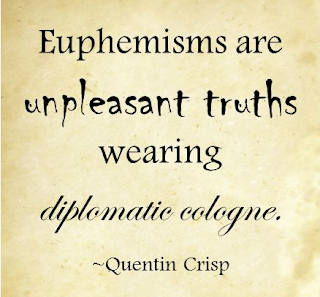 Let's revise!
What is the definition of a euphemism?

>>A euphemism is a polite way of expressing something thought to have negative connotations.

# For example, a blind person is visually challenged, a fat person is full-figured, and politicians don't lie, they are simply economical with the truth.

# According to the officialdom, an old person who cannot use their arms or legs in a normal way is a disadvantaged senior sitizen.

# One will not die but pass away.

# Going on strike equals taking industrial action, and someone who makes things difficult for others and opposes their views for no good reason is working to rule.

# People who come from lower income brackets are merely poor.

# And, you don't have a pet any longer, but a companion animal.

# Individuals with low IQs are also known as stupid.

# If you are/feeling under the weather, it means you are ill.

# Money that the government (UK) pays to unemployed people who are looking for a job is Jobseeker's Allowance rather than an unemployment benefit.

# Having a dialogue is nothing but talking.

# To change a system or situation so that it obeys laws is to regularize it.

# Your statements are definitely misleading if they are causing someone to believe something that is not true.

Are you fond of using euphemisms?

Or, you're trying to avoid that diplomatic tone and be straightforward instead?