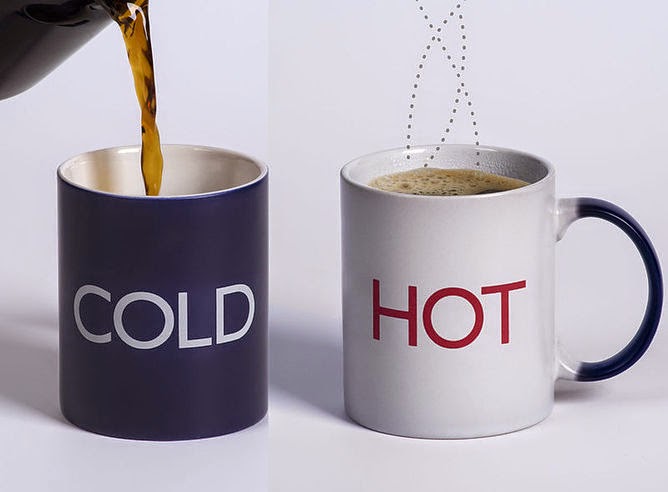 This cold weather inspired me to go through some of the temperature idioms. I'll divide it into two categories - 'cold' and 'hot' ones.

I
1. get cold feet - to suddenly become too frightened to do something you had planned to do, especially something important such as getting married.

- The poor girl was left standing there at the altar! Why didn't you come?
- I decided I just wasn't ready to get married. I got cold feet.

2. leave sb cold - to not make you feel interested or excited.

- I try to be patient with her but she was so irritating in that meeting, I just lost my cool.

- So, you've met David's parents. How did you get on?
- Well, his mother gave me a fairly frosty reception. She's a bit worried that I'm ten years older than him.

5. in cold blood - if sb kills in cold blood, they kill in a way that seems especially cruel because they show no emotions.

- Did you hear the news? A policeman has been murdered in the town centre.
- Yes, and he was killed in cold blood.

6. as cool as a cucumber - very calm or very calmly, especially when this is surprising.

- She walked in as cool as a cucumber, as if nothing had happened.

- The next morning, in the cold light of day, James realized what a complete idiot he had been.

8. pour/throw cold water on sth - to criticize someone's opinions or ideas and stop people believing them or being excited about them.

- You don't look very happy. What's wrong?
- I just presented my plan for the new office to the rest of the staff, but they all poured cold water on it. They didn't like it at all.

9. leave sb out in the cold - to not allow someone to become part of a group or an activity.

- Women's volleyball teams feel they are left out in the cold as far as media coverage is concerned.

10. keep a cool head - to stay calm in a difficult situation.

- I don't know how you manage to keep such a cool head in such a stressful office.


1. a hot potato - a problem, situation, etc. that is difficult to deal with and causes a lot of disagreement.

- The abortion issue is a political hot potato everywhere.

2. hot under the collar - embarrassed or angry about something.


- That's the fourth person trying to sell me insurance on the phone this week.
- That's nothing to get so hot under the collar about. Just hang up.

3. be in hot water (get into hot water) - to be in or get into a difficult situation in which you are in danger of being criticized or punished.


- She found herself in hot water over her comments about immigration.

4. in the hot seat - in a positon where you are responsible for important or difficult things.


- I've just been made chairman.
- Well, rather you than me in the hot seat.


- I'm really sorry. I didn't mean it. I just said it in the heat of the moment.

-  I wasn't sure about Laura at first, but I warmed to her after we'd been out together a few times.


- Have our new catalogues arrived yet?
- Here's the first one hot off the press.

8. go/sell like hot cakes - to be bought quickly and in large numbers.

- Her new lipstick is apparently selling like hot cakes.

9. a hotbed of sth - a place or situation where a lot of particular activity, especially an unwanted or unpleasant activity, is happening or might happen.

Do you know any other? Can you guess their meaning?